Blending the old and the new, mixing ideas and sensations, Canada’s folklore wraps itself in many different origins and colors including France, Ireland, England and Scotland.

From the excitement of the stage to the warmth of your partner’s smile, the Éclusiers de Lachine carry the will to make folklore accessible to all.

The fine connoisseur recognizes the origin of each of the dances, costumes and music. The public is carried away on a journey: the execution of the repertory undoubtedly bears the traces of our time.  Charlevoix, Lac St-Jean, Isle-aux-Coudres, Lanaudière ... the choreographies are contextualize around the four seasons, from spring to winter: the corn roast, the picnic, the mid-Lent and the sugars. Large suites offer a panorama of traditional dances in Quebec.

Composed of dancers between the ages of 16 and 45, the troup showcases up to eight costumes, in authentic Quebec’s tradition, as well as several jigs, one of the jewels that makes the company famous.

In the past 40 years, the group has traveled hundreds of kilometers to go to many festivals, mainly in Europe and North America. It invites people from around world to discover the richness of its repertoire, which includes jigs, quadrille, waltz, polka, and more!

Les Éclusiers de Lachine’s shows will make you feel the festive atmosphere of our ancestors’ evenings and festivities . 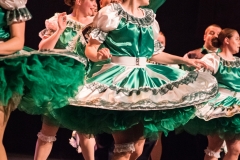